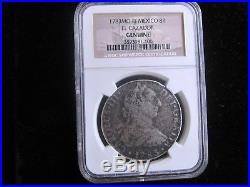 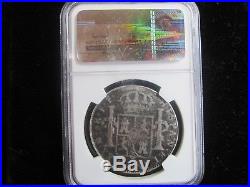 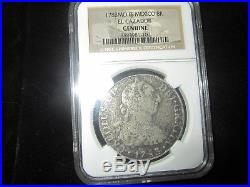 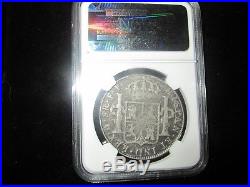 The Spanish 8 Reale Coin and the. Wreck of the El Cazador. The Coins That Changed the World. This is an Authentic Shipwreck coin. The amount of visable detail varies among these. Genuine Sea Salvaged 8 Reales Coins. When freshly minted, there is on the. And the words, “DEI GRATIA” in English, ” BY THE GRACE OF GOD “. These Coins have been under the Caribbean Sea for over 2 Centuries and Still show Great Detail! OBVERSE : ARMORED BUST OF CHARLES III FACING RIGHT. REVERSE : CROWNED SHIELD FLANKED BY PILLARS WITH BANNER. DIAMETER : 38.80 MM. WEIGHT : 28.00 GRAMS. ” Size and Weight will vary “. The first United States legal tender Silver Dollar was minted, not here, but in Mexico City. It was the Eight Reales, the “Pieces of Eight, ” whose scrolls on its. Obverse were the origin of the American dollar sign. The Eight Reales was the Largest and Heaviest Silver Coin minted for over 200 years, actually bigger and heavier than the Morgan Silver Dollar. On August 2, 1993, 50 miles off the shore of Louisiana, a humble fishing trawler, named The MISTAKE , snagged some debris on the ocean floor, only to discover coins among the objects caught in its net. At a depth of 300 feet, the crew had discovered the final resting place of the long lost Spanish Brig, El Cazador, and its treasure of Spanish 8 reale silver coins. How did these coins change the world? In 1783, The American Revolutionary War won against the British with the help of similar coins. It is a little known fact that during the war, Spain quietly became the critical ally of the U. And arguably was responsible for the Americans successful victory. Spain provided war materials, military advisors, and opened up a second war front by engaging and defeating numerous British ships and fortifications along the Caribbean and Pacific coasts. Most importantly, Spain provided cash in the form of these very same 8 reale silver coins to the American patriots to support the war effort. At the end of the war, on Sept. 3, 1783, America, Spain, and France sat at the treaty table in Paris with the British and signed concurrent agreements that ended the war. Without these coins, America’s freedom could have been lost. Four months later, on January 11, 1784, El Cazador, “The Hunter, ” a Spanish Brig of War, set sail from Vera Cruz, Mexico for the port of New Orleans. But, unlike the previously minted silver 8 reale coins that insured America’s successful beginnings, it was in this case that these coins’ absencethe loss of the 8 reale coins carried by El Cazador, that was the seminal event that triggered the rapid expansion of the new nation known as the U. To bolster the Territorys fledgling economy, King Charles III of Spain ordered the near-worthless paper currency circulating there to be redeemed with silver coinage from the Mexican Mint the first Spanish mint in the. The El Cazador carried those ill-fated coins. We will never know whether pirates, storms, or other peril caused her demise. Spain’s later efforts to stabilize the Territorys economy and profits from its key North American holding were unsuccessful. Finally in 1800, a reluctant Charles IV of Spain agreed to cede Louisiana back to France for a small sum. Just three years later, in 1803, Napoleon agreed to sell the vast territory to U. For the bargain price of only 3 cents an acre, the new nation doubled in size. It was the turning point that opened the floodgates for westward expansion, and established America as the land of opportunity. But none of these events, the winning of the war or the expansion of America, would have happened if not for “the coins that changed the world”. These huge 8 reale coins, known as Spanish milled dollars or “pieces of eight”, were the very first U. There use was for ordinary commerce in the early days of the United States and were legal tender there until 1857. The ribbon-wrapped columns sculpted on the coins’ reverse inspired the American dollar sign. The coins were cut in 8 pie-shaped sections for small change. These “bits” gave rise to the old description of “two-bits” as equal to a quarter-dollar. Even with professional conservation, these huge coins show the distinctive evidence of undersea corrosion, but are in remarkably good condition. There are a limited number of them available. The amount of visible detail varies among these genuine sea salvaged 8 reale coins. When freshly minted and all the details visible, there is on the obverse a portrait of King Carolus III of Spain (17591788) and the words “DEI GRATIA” (By the Grace of God). Below the portrait is the coins year of mintage. The majority of dated coins recovered are from 1783, with some dated earlier. The reverse read HISPN. REX (King of Spain and the Indies) followed by the Mexico City mintmark, the denomination 8R (8 Reales) and the assayers initials at the time of minting. The central coat-of-arms displays the crowned shield of Castile and Leon. The shield shows three crosses at its center, signifying the Holy Trinity, and a pomegranate in tribute to the Spanish city of Granada. To either side of the coat-of-arms stand the Pillars of Hercules with the motto PLUS VLTRA (More Beyond) on the surrounding ribbons. The free listing tool. The item “Spanish SILVER 8 Reale El Cazador Shipwreck coin that changed the World NGC” is in sale since Thursday, December 21, 2017. This item is in the category “Coins & Paper Money\Coins\ World\North & Central America\Mexico\Colonial (up to 1821)”. The seller is “californiacoolcoins4u” and is located in Colorado. This item can be shipped worldwide.