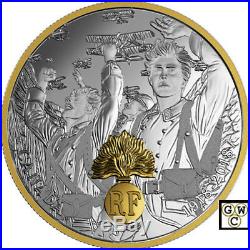 We were allies in the trenches and, for the first time, in the skies. Accented with a gold-plated infantry insignia, our coin in our First World War Allies series reflects on France’s enormous sacrifices and triumphs on the Western Front during the First World War, where, barely a decade after the first flight, aviation played an increasing role in La der des der (The war to end all wars). The reverse image by Pandora Young transports the viewer to the Western Front and in the trenches that defined the First World War. On the faces of the French soldiers (les Poilus), the expression is one of hope and wonder as they lift their gaze up to the sky, where their fellow countrymen have taken flight to battle for air superiority. While the setting is a stirring reminder of the French Armys victories and sacrifices in battle, the aircraft of the Aéronautique Militaire also salutes the legacy of French aviators and engineers, who were at the forefront of progress as aviation evolved from novelty to military necessity. Selective gold plating highlights the infantry insignia of the French Army, represented by the flaming bomb bearing the letters RF (République Française). The selectively gold-plated obverse features the effigy of King George V by Sir E. A Special four-coin series: As we approach the 100th anniversary of the Armistice of 11 November 1918, this series reflects on teh wartime contributions of four of the many Allied forces that were united in a common cause, and bound by both heroism and duty. Four allies, one last push: While Canadian and French forces fought in the trenches, Canadian airmen also served in the skies, where France’s escadrilles and fighter pilots were at the forefront of aircraft development. The Image of hope: The highly detailed reverse presents the view from the front lines, in a time when the novelty and risks of flight still inspired awe. Multiple finishes add a sense of depth to the scene, in which French troops -and the viewer- look up to see French aircraft flying overhead. Selective gold plating: Like all coins in this limited series, selective gold plating highlights the infantry insignia of the French Army, an emblem that speaks of sacrifice and victory in battle, such as the Battle of Verdun in 1916 and at Amiens in 1918. For King and country: Selective gold plating also highlights the effigy of King George V on the obverse, which resembles that of all Canadian coins issued during the First World War. Composition: 99.99% pure silver. Weight(g): 31.39. Packaging: Standard maroon clamshell with black beauty box. Finished Size: 67 mm x 67 mm. Launch Date: August 7, 2018. The item “2018’France-First World War Allied Forces’ Prf $20 Fine Silver 1oz. Coin(18558)NT” is in sale since Friday, January 11, 2019. This item is in the category “Coins & Paper Money\Coins\ Canada\Commemorative”. The seller is “gatewestcoins” and is located in Winnipeg, Manitoba. This item can be shipped to Canada, United States.