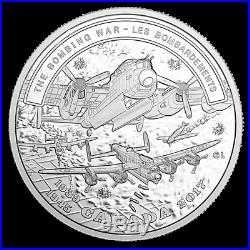 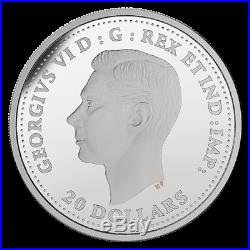 During the Second World War, Bomber Command operations over Occupied Europe, Germany and Italy represented Canadas biggest air commitment abroad, where tens of thousands of Canadians served in the Royal Canadian Air Force (RCAF) and Royal Air Force (RAF). The Royal Canadian Mint reflects on the courage and sacrifice of these Canadians, who braved enemy fire and often-difficult flight conditions to complete their missions. FOURTH coin in the Second World War Battlefront Series, which chronicles Canadas participation in key battles of the Second World War. Honours the contributions of the roughly 40,000 Canadian men and women who served as part of Bomber Commandon the ground and in the skies over Occupied Europe, Germany and Italy. Struck with a proof finish in 99.99% pure silver, the design offers a sense of the danger and intensity of each mission during the Allied bombing offensive. Engraved in outstanding detail and with great care; which extends to the use of the effigy of King George VI on the obversethe same one that appeared on Canadas coins during the war. A great addition to any military or history-themed collection. A touching tribute to a loved one who served during the war, or a meaningful gift for those who have proudly served their countrythen and now. The reverse design by Canadian artist Glen Loates takes to the skies for a glimpse of the action during the Allied bombing offensive. Highly detailed engraving re-creates a representation of Avro Lancaster B. III bombers flying through a storm of flak (anti-aircraft fire) during a bombing mission over Germany. In the foreground, the Lancasters bomb bay doors are about to close after the aircraft has dropped its load. The aircrafts positioning allows for a close examination of the twin oval tail fins, its glasshouse canopy and transparent nose, along with two of its four Rolls Royce Merlin engines. At a lower height, two other Lancasters have just dropped their bomb loads in the background. At right, is a German Messerschmitt BF-109, a stalwart of the Luftwaffes fighting force; this aircrafts attack is cut short as it emits a trail of smoke after being hit by one of the Lancaster gunners. No: 147820 Mintage: 7,500 Material: 99.99% pure silver Finish: Proof Weight: 31.39 g Diameter: 38 mm Edge: Serrated Certificate: Serialized. (WITH THE EXCEPTION OF GOLD COINS). ONCE YOUR DONE SHOPPING, PLEASE MESSAGE ME AND I WILL SEND YOU A COMBINED INVOICE. The item “THE BOMBING WAR SECOND WORLD WAR BATTLEFRONT SERIES 2017 Fine 1 oz Silver Coin” is in sale since Friday, September 08, 2017. This item is in the category “Coins & Paper Money\Coins\ Canada\Commemorative”. The seller is “the_coin_shoppe” and is located in Scarborough, Ontario. This item can be shipped to United States, Canada, United Kingdom, Germany, Australia.