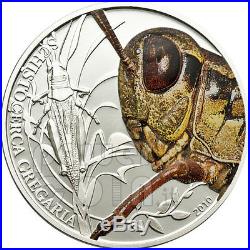 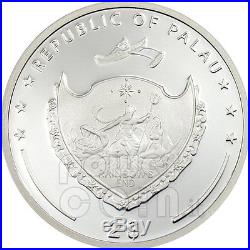 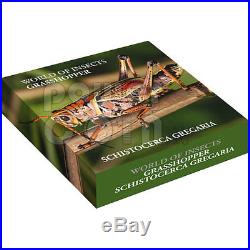 15.57 (1/2 oz). Amazing coin issued by the Republic of Palau in 2010 belonging to new series: World of Insect. It depicts the terrible grasshopper species and particularly it honors the desert locust: one of the Egyptian biblic plagues. The coin reverse depicts a beautiful coloured locust, on left side the total representation of an insect while it’s on the grass, the legend “SCHISTOCERCA GREGARIA” and the year of issue. The coin obverse depicts the Palau State Coat of Arms. SCHISTOCERCA GREGARIA Since the beginning of time, Desert Locusts have been a subject to hatred and fear. Their habits are simple they reproduce at lightning speeds, and when the population has reached its peak, they move to a new area, leaving destroyed crop fields behind them. The largest population of these animals currently resides in the Sahel region in North Africa, although they are also widespread all over the Arabian countries, Iran, Israel, Turkey and South of Spain. Despite the efforts to control their numbers to reduce the massive damage done to crop fields, their population still remains high, and millions of tons of crop are destroyed every year. The desert locust is one of about a dozen species of grasshoppers known as locusts which, unlike other grasshoppers, are able to change their behaviour in response to population density. This enables them to form swarms that can migrate over large distances. Locust swarms vary from less than one square kilometre to several hundred square kilometres. There can be from 40 million to as many as 80 million locust adults in each square kilometre of a swarm. The item “GRASSHOPPER World Of Insects Silver Coin 2$ Palau 2010″ is in sale since Tuesday, May 8, 2012. This item is in the category “Coins & Paper Money\Coins\ World\Australia & Oceania\South Pacific”. The seller is “powercoin_italy” and is located in Roma. This item can be shipped worldwide.