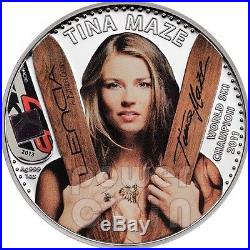 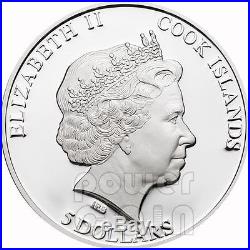 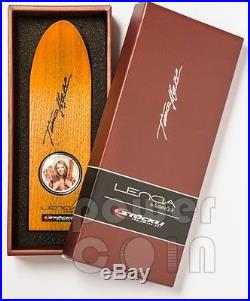 31.1 (1 oz). Tina Maze is currently Slovenia’s most successful female alpine skier and boasts many victories in the World Cup, most of these in Giant Slalom and even a victory in Downhill and Super-G. From now she is proud to be the testimonial of an amazing coin in which it is incastonated an original piece of Stöckli ski with which she won the gold in 2011. The coin reverse depicts a splendid portrait of Tina Maze with her famous ski Stöckli of which it is embedded in the coin an original piece. The coins obverse depicts the Ian Rank-Broadley effigy of Her Majesty Queen Elizabeth II and the monetary denomination. Tina Maze Tina Maze (born 2 May 1983) is a World Cup alpine ski racer from Slovenia, and is one of 6 women who have won in all five World Cup events. She has 18 World Cup victories and is the current world champion in giant slalom, as well as the current World Cup overall leader in the 2013 season. She competed in the 2001 World Championships and in the 2002 Winter Olympics the following year. Maze started her career as a giant slalom specialist but later expanded and competes in all disciplines. She won the silver medal in giant slalom at the 2009 World Championships in Val d’Isère, France. At the 2011 World Championships in Garmisch, Germany, Maze won the silver medal in the combined and the gold medal in the giant slalom. She was the Slovenian flag bearer at the opening ceremony of the 2010 Winter Olympic Games in Vancouver, Canada, where she won two silver medals in the Super-G and giant slalom at Whistler. In February 2008, she won the first downhill in her career in St. She also has two victories in super combined and one in slalom. In 2005, 2010, and 2011, she was awarded the title of the best Slovenian female athlete of the year. In terms of the World Cup victories, the 2013 season was her best, with seven victories by January 2013. Maze won the first four giant slaloms and the super combined in St. Moritz to give her a sizable lead in the overall standings. Her first victory in a Super-G on 13 January 2013 in St. Anton made her a member of the small group of all-event winners in alpine skiing. On 26 January 2013, Maze finished second in giant slalom in Maribor, Slovenia, and thereby clinched her first World Cup title in giant slalom. The item “TINA MAZE Official License World Ski Champion Silver Coin 5$ Cook Islands 2013″ is in sale since Friday, March 15, 2013. This item is in the category “Coins & Paper Money\Coins\ World\Australia & Oceania\South Pacific”. The seller is “powercoin_italy” and is located in Roma. This item can be shipped worldwide.