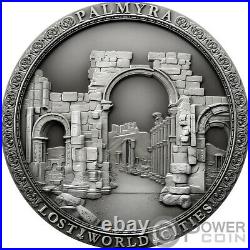 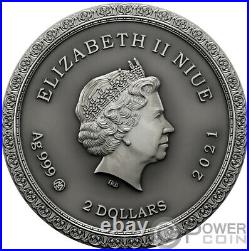 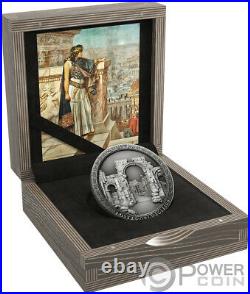 62.2 (2 oz). This beautiful 2 Oz Silver coin is the first issue in the Lost Word Cities series and features Palmyra, the ancient Arabian city in central Syria. The coin has an Antique Finish quality and comes in a wooden case, along with a Certificate of Authenticity. Limited mintage of 500 pcs worldwide. The reverse of the coin depicts the ruins of Palmyra and on the top, the inscriptions: PALMYRA the name of the coin and on the bottom: LOST WORD CITIES the name of the series. The obverse of the coin features the effigy of Her Majesty Queen Elizabeth II and the inscriptions: ELIZABETH II – the name of the Queen, NIUE the issuing country, 2021 the year of issue, 2 DOLLARS the face value and ” Ag 999.9″ – the fines of the Silver. The item “PALMYRA Lost World Cities 2 Oz Silver Coin 2$ Niue 2021″ is in sale since Thursday, March 18, 2021. This item is in the category “Coins & Paper Money\Coins\ World\Australia & Oceania\Other Oceania Coins”. The seller is “powercoin_italy” and is located in Roma. This item can be shipped worldwide. 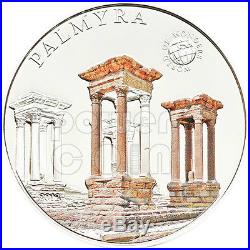 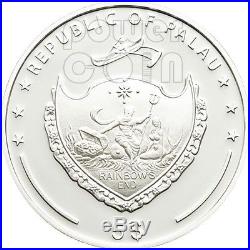 A beautiful and elegant coin dedicated to the Syrian city Palmyra, it belongs to “World of Wonders 2012″ series which aims to highlight the most exciting and historically important monuments existing in the world. The coins obverse depicts a partially-color composite image of the Sirian city Palmyra. This coin set is a great tribute to the wonders:Florence Cathedral (Italy) Chapel Bridge (Switzerland) Canadian National Tower (Canada) The Eiffel Tower (France) Stonehenge (UK) Angkor Wat (Cambodia) The Easter Islands (Chile) The Acropolis (Greece) The Kiyomizu Temple (Japan) The Statue of Liberty (United States) The St. Basils Cathedral (Russia) The Neuschwanstein Castle (German) The Leaning Tower of Pisa (Italy) The Alhambra (Spain) Timbuktu (Mali) Mount Rushmore (USA) The Opera House (Australia) The Tower Bridge (UK) The Temple of Heaven (China) The Potala Palace (China) Schönbrunn Palace (Austria) Persepolis (Iran) Brandenburg Gate (Germany) Hagia Sophia (Instabul) Palmyra (Syria) St Patricks Cathedral (Dublin) Itsukushima Shrine (Japan)The reverse shows the Coat of Arms of Palau. Brandenburg Gate The Brandenburg Gate was erected between 1788 and 1791 and is a popular sightseeing destination. Throughout its history, the gate was repeatedly in the focus of political events. The quadriga, a chariot drawn by four horses driven by the goddess of victory, which is attached to the gate, was stolen by Napoleon as part of the plundering of cultural art in 1806. Only eight years later, after the victory of the Wars of Liberation, it was brought back to Berlin. During the Cold War the Brandenburg Gate was in the middle of the exclusion zone of the Berlin Wall. Since the fall of the Berlin Wall in 1989, Berlins landmark is a symbol of the reunification of todays Germany. Hagia Sophia Today the Hagia Sophia is a museum and is in Istanbul, formerly Constantinople. It was built in the 6th century as a Byzantine church. The dome especially is considered an architectural masterpiece. In 1453 Constantinople was occupied by the Ottomans. Consequently the Haiga Sophia was looted and many wall paintings were destroyed. Thereafter, the Hagia Sophia was desecrated and transformed into a mosque. In the same year as the conquest, a minaret was built onto the former Sophia Church. Today the museum is surrounded by four Minarets. Syrian city Palmyra The Syrian city Palmyra is said to have already been populated round about 7000 B. Back then the city was known as Tadmur which roughly means as Palm tree city. Its commercial zenith was in the 2nd and 3rd centuries. Zenobia, the oasis citys self-appointed queen, expanded her dominion and conquered Egypt. The Romans did not accept this because Egypt was their granary source of grain, therefore, they attacked Palmyra. Zenobia had to surrender. After another riot around 273 A. Rome was merciless and looted and destroyed Palmyra. The coin shows a Tetrapylon – a quodrinomial Roman monument of the city tectural masterpiece. St Patricks Cathedral The St Patricks Cathedral is in Dublin and with a length of over 90 meters is the biggest church in Ireland. Originally it was a small chapel which was situated next to a spring. Irelands patron saint, St. Patrick, supposedly carried out baptisms in the 5th century at this spring. Todays cathedral was called “Peoples Church” for a long time by the Irish and was built from 1191 until 1270. From 1713 up until 1745 the author of Gullivers Travels, Jonathan Swift, was the dean of this Irish Cathedral and after his death he found his eternal rest there. Today the church is used for various ceremonial occasions. Itsukushima Shrine The Itsukushima Shrine consists of several buildings and has been an UNESCO heritage site since 1996. The shrine is believed to have originated around 593 and has existed in its current form since 1168. Several spiritual gods of the Shinto religion are worshipped within it. The Torii is one of the shrines buildings and was erected in its current form in the year 1875. It is one of the best-known tourist attractions in Japan. The red colour of the Torii, bird perch, creates a lovely contrast to the blue ocean and makes it look like it is floating on the water. It is accessible on foot during low tide. The item “PALMYRA Syria World Of Wonders 5$ Silver Coin Palau 2012″ is in sale since Monday, May 07, 2012. This item is in the category “Coins & Paper Money\Coins\ World\Australia & Oceania\South Pacific”. The seller is “powercoin_italy” and is located in Roma. This item can be shipped worldwide.