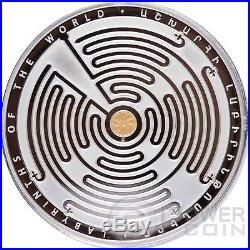 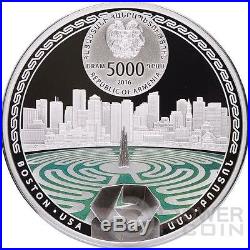 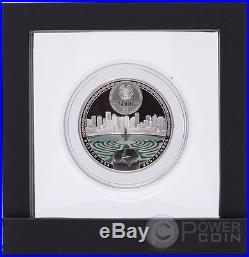 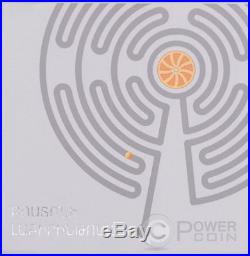 62.2 (2 oz). BOSTON Labyrinths Of The World 2 Oz Silver Proof Coin 5000 Dram Armenia 2016. This 2 Oz Silver Proof coin of the new The Labyrinths of the World series, dedicated to the most spectacular worldwide labyrinths, features the Boston labyrinth. This 51 mm colored coin features a gilded ball rolling through the labyrinth’s trails. The coin comes in a case with cardboard cover with Certificate of Authenticity. Limited mintage to 2.000 pieces worldwide! The reverse of the coin features a contour of the Boston labyrinth with a sign of eternity in the center. All around the reverse, the inscription: Labyrinths of the World – the name of the coins series and the same inscription in Armenian language. The obverse of the coin depicts The Armenian Heritage Park Memorial (Boston), the panorama of the city and the Coat of Arms of the Republic of Armenia. In the top of the obverse, the inscription: 5000 Dram – the face value and 2016 – the issue year. On the bottom of the reverse, the inscription: BOSTON – USA – the name of the coin and the same inscription in Armenian language. Boston Labyrinth The Armenian Heritage Park memorial opened in Boston, Massachusetts, the USA, in 2012. The architect is Donald Telalyan. The memorial comprises an abstract sculpture and a labyrinth. The sculpture, a split dodecahedron, is dedicated to the memory of Armenian Genocide victims. It is symbolic of Armenians who were pulled apart from their country of origin. Annually, the sculpture is reconfigured as it reshapes the two halves into a new and different configuration, giving it the new spirit and idea of uniting the people scattered all over the world. At the center is a circular labyrinth, symbolizing the path of life of those Armenians who survived. Jetting on the sign of eternity a single wellspring marks labyrinth’s center, representing hope and rebirth. The Armenian Heritage Park memorial is also generally recognized by other nations living in the USA as an expression of an idea of national identity and unity. The item “BOSTON Labyrinths Of The World 2 Oz Silver Proof Coin 5000 Dram Armenia 2016″ is in sale since Tuesday, January 10, 2017. This item is in the category “Coins & Paper Money\Coins\ World\Asia\Other Asian Coins”. The seller is “powercoin_italy” and is located in Roma. This item can be shipped worldwide.