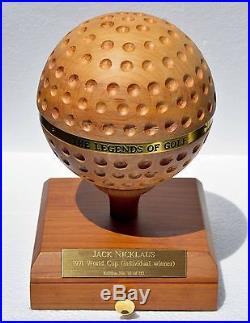 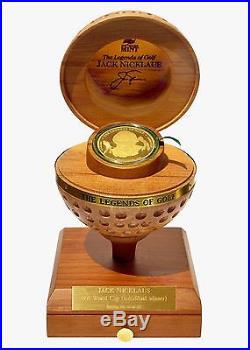 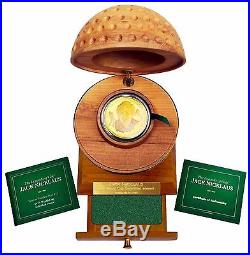 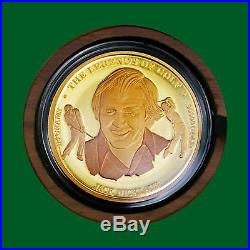 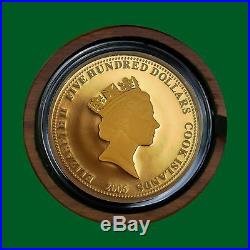 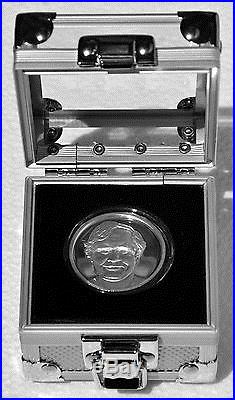 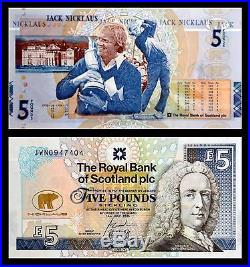 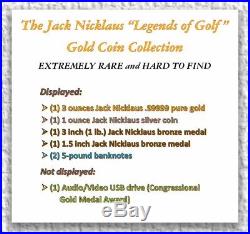 Jack Nicklaus EXTREMELY RARE 3-ounces “The Purest Gold Coin” – 113 in the World. Based on wins in the Major championships, the greatest golfer ever maybe Jack Nicklaus , who won 18 Majors, including the Masters six times in his career. Tiger Woods currently has 14 Major wins, and will probably win some more. Winning all four Majors is considered a grand slam. Only five golfers have won all four Majors at any time during their career (a Career Grand Slam). These are Gene Sarazen, Ben Hogan, Gary Player, Jack Nicklaus, and Tiger Woods. Not only have they done it once, Woods and Nicklaus have won each of the four Majors three times. Jack Nicklaus still is the most accomplished player in the entire history of major championship golf. This is a stunning tribute to one of the worlds greatest and beloved golfers. This fantastic, legal-tender gold Proof takes on added significance because it was produced with the full approval of Jack Nicklaus himself and includes his personal autograph on the numbered Certificate of Authenticity. The Jack Nicklaus Legends of Golf gold coin is limited to a worldwide edition of just 113 coins. Which is the same number of his career victories on the tour? Whats more, this collectible was struck in. 99999 pure gold making it the purest gold coin in the world. The design of the Jack Nicklaus gold proof is the work of international sports artist Graig Primrose, who created a montage of Nicklaus in different poses from different stages in his career. Perhaps the games greatest player, Nicklaus was known as the Golden Bear during his 41-year career. In the course of his playing days from 1962 to 2003, Nicklaus won a staggering 113 victories around the world, including 100 professional victories, 73 PGA Tour wins, and a record 18 Majors. A five-time PGA Player of the Year winner, Nicklaus ended his career by making a fifteen-foot birdie putt at the British Open Championship at St. Andrews on July 15, 2005. The Jack Nicklaus Legends of Gold gold proof coin comes beautifully displayed in a handcrafted wood display stand that looks like a large golf ball. It opens to reveal a place for the glittering coin. Its a showcase that you can be proud to display anywhere especially at home or in your office. Also enclosed is the official Certificate of Authenticity signed by the Golden Bear. The certificate has a serial number which is also engraved on the plaque face. With this certificate is a small booklet that is located in the small compartment in the base having color pictures and stories about his career. The items you see in the pictures above are the items you will receive. I wanted to grade this coin because I collected coins for many years and know that the higher grades are worth more. I found that this coin, being so unique, does not compete in the market this way. The limited edition, the purity, and its 3oz. Weight & size place it in its own category along with its 112 sister coins. Also, the fact that the display as it is would have to be altered in order to accommodate it being placed in a holder. Basically, this is a sports collectible and should remain unaltered in order to keep its integrity. All items are in excellent condition and include. The additional silver case with Jack Nicklaus silver coin. Two Jack Nicklaus bronze metal coins. Audio/video recording of the Congressional Medal Award on a USB drive. Two’2005′ 5-pound bank notes are included at no additional cost. IF YOURE THE LUCKY ONE. The item “Jack Nicklaus EXTREMELY RARE 3-ounces The Purest Gold Coin 113 in the World” is in sale since Saturday, August 05, 2017. This item is in the category “Sports Mem, Cards & Fan Shop\Fan Apparel & Souvenirs\Golf”. The seller is “sdjunda1″ and is located in Palm City, Florida. This item can be shipped worldwide.