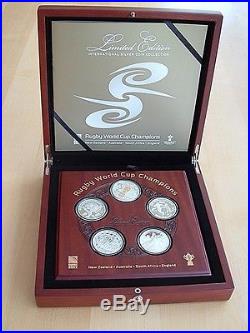 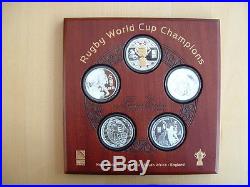 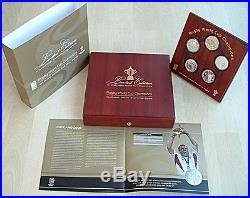 Rugby World Cup – New Zealand. Champions Silver Proof Coin Set 2011. 2011 Rugby World Cup Champions Silver Proof Coin set. 2011 Rugby World Cup Champions Silver Proof Coin set: Specification. Rugby World Cup 2011. Champions Silver Proof Coin Set. Salient Features of the set. Contains a coins from each of the past winning nations (New Zealand, Australia, South Africa and England). All four nation coins are exclusive to this set. The coveted Webb Ellis Cup is featured on the fifth coin of the collection. Includes individually numbered booklet with commentary by acclaimed sports commentator, Keith Quinn. Presented in a beautifully crafted wooden case. Limited Edition of 2011 sets. Featured coins in set include. RWC 2011 Webb Ellis Cup Coin The Rugby World Cup 2011 Webb Ellis Cup Coin features the Webb Ellis Cup in 24-carat gold gilding. This 1oz pure silver proof coin is intricately detailed, Government issued and New Zealand legal tender. The New Zealand Coin – exclusive to this set The first-ever Rugby World Cup Tournament was hosted by New Zealand and Australia in 1987. The All Blacks faced a passionate French side in the Final at Eden Park and emerged victorious. The New Zealand silver proof coin has been struck from pure silver and shows an All Black in the 1987 uniform, fending off an opponent. The backdrop is a stylistic interpretation of the hammerhead shark (Mangopare) and the fern shoot (Koru) – the unique branding of RWC 2011. The Australia Coin – exclusive to this set The Wallabies first victory came in 1991 in London, where they defeated the English in a close but low-scoring game. Their second triumph was in 1999 in Cardiff, Wales, against France. The pure silver Australia coin is legal tender in Australia and has been struck to proof quality. The prominent player is shown in the official 1991 Australian kit during a line-out. The coin also bears RWC’s stylised Webb Ellis Cup design in the background. The South Africa Coin – exclusive to this set South Africa entered and hosted the Tournament for the first time in 1995. Upon reaching the Final in Johannesburg, they faced the All Blacks and scored the winning drop goal in the last two minutes of extra time. Their second victory came in 2007 against France in Paris. The South African coin is 2 Rand and legal tender. Struck in proof quality fine silver, this coin pictures a player in South Africa’s 2007 kit running with the Rugby ball against a background of RWC’s stylised rugby ball image. England and Australia were thrilled to meet at the Final in Sydney, where England obtained their first-ever Rugby World Cup Championship title during the last moments of extra time. This proof-quality coin is exclusive to this set, and captures an English player in the 2003 uniform performing a drop-kick. The background includes the stylised rugby ball fishbone graphic from the infamous Rugby World Cup Event Mark. Count on Coin Bazaar for Classy Collectables. We are appointed stockist for. Disney Gifts & Collectables. 2015 Rugby World Cup. Official Football Club Merchandise. Gund – Plush Soft Toys – Acclaimed USA Brand. Simply’LIKE’ our Facebook page FineGifts. Important Guidance – Please Read. We at Fine-Gifts Nottingham strive hard to ensure that your parcels are packaged and sent out swiftly. However we highly recommend that you opt to choose the Recorded Signed-For postal service. You will then be in a postion to trace your parcel and make claims against loss more easily then the standard free service. Your feedback matters to us. That you have gained a positive experience is rewarding for us and know that you will return back to our store again and most importantly recommend our service to your other contacts. We always reciprocate your feedback by doing the same. Top Brands < > Top Class Service < > Top Rated Performance. See my other listings. For more great items! All prices are inclusive of VAT. We do not accept Cheque, BACS Transfers and Cash on Collection options. Payments must be received within 3 days of sale completion. All orders received before 12 Noon are dispatched the same day excluding weekends and statutory bank holidays. Add to Favorite Sellers. Txzj pxzj6791 txzj19 txzj63. The item “Rugby World Cup Champions Silver Proof Coin Set 2011 New Zealand Post” is in sale since Friday, May 24, 2013. This item is in the category “Coins\Coins\World\Oceania/Australasia”. The seller is “finegiftsnottingham2015″ and is located in Nottingham, Nottinghamshire. This item can be shipped worldwide.